Hot Dog! Arson K-9 investigator is on the case in Southern Nevada

30 Sep Hot Dog! Arson K-9 investigator is on the case in Southern Nevada 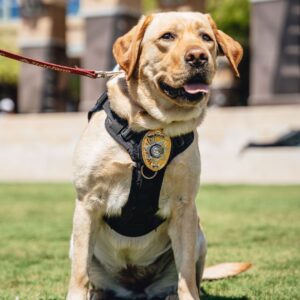 The North Las Vegas Fire Department has a highly trained arson investigator on its team who nose how to sniff out intentionally set fires. Relying on good old-fashioned detective work to solve the case, this K-9 wunderkind is on the scent when she’s on the scene.

In honor of National Fire Pup Day on October 1, meet Jersey who is a four-year-old female purebred yellow Labrador trained as an accelerant detection canine or arson dog. Along with her handler Darcy Loewen, Jersey is a 2021 graduate of the State Farm Arson Canine Program which was established in 1993 and has put approximately 425 dogs and their handlers to work in 46 states, the District of Columbia, and three Canadian provinces.

“Jersey and I spent an entire month in Concord, New Hampshire going through intense training 10-12 hours daily until I completed the 200 mandatory hours to pass the certification test,” says Darcy, a 16-year veteran of the North Las Vegas Fire Department who has been part of the department’s Arson Investigations Division as the K-9 Handler for over a year.

“Jersey was trained as an accelerant detection canine in Maine for one year prior to me being assigned to her at the Academy. Once I was paired up with Jersey, we completed the 200 hours of training in New Hampshire and passed certification in May of 2021,” explains Darcy of his first arson dog, adding that he and Jersey must recertify annually to confirm the verification and legitimacy of training together.

During the State Farm Arson Dog Training Program, which matches and trains handlers like Darcy with accelerant detection canines to counter arson fraud, raise awareness, and help reduce future occurrences, Jersey is trained to smell ignitable liquids that would be typically used with intentionally set arson fires. In comparison to humans who have about six million olfactory receptors in their noses, dogs possess up to 300 million. The part of a dog’s brain that is devoted to analyzing smells is 40 times greater than humans. Labrador Retrievers are uniquely qualified for the role of arson dog because this breed has an unmatched ability to discriminate scents at a fire scene.

Upon completion of the training/certification sponsored by State Farm Insurance Company at the cost of $25,000 per dog which also includes the funding for the initial training/feeding and animal care, Darcy and Jersey arrived back in North Las Vegas to begin their partnership with the NLVFD Arson Investigations Division.

Trained and reinforced using a food-reward method, when Jersey smells a flammable liquid (gas) she sits and is then rewarded with food from Darcy’s hand. “We have to train every single day, multiple times throughout the day because that is how she is fed,” says Darcy. “Jersey is never fed from a bowl and is never fed treats. She’s happy when she’s working for her food.”

A typical day in the lives of the dynamic arson detection duo starts out very early in the morning with a short walk. “Then feeding first thing to start the day off. I will train her throughout the day planting gas drops in various places at whatever location I’m at,” says Darcy. “We are “on call” 24-7 and are typically requested by the Arson Investigator to assist with searching an incident to determine whether an ignitable liquid was used to start a fire.”

One of 100 human-canine arson teams operating in North America, Jersey and Darcy have been dispatched to and investigated over a dozen arson incidents during the past year. They are responsible for investigating the entire southern region of Nevada while a K-9 unit in Reno investigates the northern part of the state.

Darcy’s favorite part of being a K-9 Handler is when they’re on scene. “Jersey is so focused on her job, her nose is on the ground, and I can hear her processing everything she’s smelling until she hits that saturation point of an ignitable liquid then she will sit, make eye contact, and point to the source with her nose. At that point, I will roll up and praise her then reward her with food. It’s a really good feeling,” marvels Darcy, who adds that Jersey’s favorite part of this whole process is getting all the attention and endless belly rubs.

This canine collab has worked out well in all senses. “Jersey has been a great addition to the NLVFD and has enhanced our Arson Investigations Division,” enthuses Darcy. “She is a great partner and is with me 24-7, making us partners and family.”