27 May ON THIS DAY IN HISTORY: BEVERLY HILLS SUPPER CLUB FIRE KILLS 165

Posted at 15:22h in Today In History by TERPconsulting Team 0 Comments 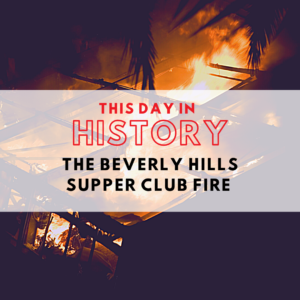 It was on May 28, 1977, that a fire took the lives of 165 people and injured over 200 others when it leveled a popular supper club in Southgate, KY. Renowned throughout the Midwest for showcasing entertainers of national renown, the Beverly Hills Supper Club was bustling with wedding parties, retirement celebrations, and a bar mitzvah as well as nightclub patrons numbering around 3,000 during the busy Memorial Day Weekend.

It was around 8:30 p.m. when a group of revelers celebrating a wedding in the Supper Club’s Zebra Room decided to end their party early because the room was too hot. It was close to 9 p.m. when employees smelled smoke and entered the Zebra Room to investigate. They immediately summoned the fire department and started using fire extinguishers to put out a small blaze. Unwittingly, by opening the door they fed the fire the necessary oxygen to move at a deadly pace throughout the approximately 65,000-square-foot venue.

It only took four minutes for firefighters to arrive, but the fire reached the venue’s largest room, the Cabaret Room, within minutes. The Cabaret Room could safely accommodate 600 people, but on that night, it was estimated that there were between 900 and 1,300 people in the showroom to see singer and actor John Davidson perform.

Unfortunately, the 18-room Southgate venue which was a sprawling space due to several expansions over the years lacked an automatic fire alarm. Nor did the building, which was constructed in 1937, have fire suppression sprinklers or smoke detectors. At that time, fire and life safety protection devices such as these were not required in venues such as the Beverly Hills Supper Club. The lack of sprinklers and an automatic alarm system along with overcrowding, insufficient fire exits, a confusing layout due to the piecemeal building additions, lack of evacuation plan, and hazardous electrical wiring were all cited as causes for one of the 10 deadliest public assembly and nightclub fires in U.S. history, according to the National Fire Protection Association (NFPA).

Of the 165 who lost their lives, mostly to smoke inhalation, all but two of those who perished were found in and around the Cabaret Room, with 125 clustered near the room’s north exit and another 34 at the room’s southern exit.

The NFPA dispatched five specialists to conduct a two-week on-site investigation which resulted in code changes. The NFPA team’s report, “Reconstruction of a Tragedy: The Beverly Hills Supper Club Fire,” concluded that the fire’s cause was most likely electrical. The 1981 edition of NFPA 101 — Life Safety Code required new and existing assembly occupancies with occupant loads exceeding 300 to have a fire alarm system with voice messaging notification. Code changes also required new assembly occupancies with occupant loads exceeding 300 to be outfitted with a sprinkler system.

Forty-five years later, construction is currently in progress on a retirement village, apartments, and homes on the former site of the Beverly Hills Supper Club which has stood empty for the past almost four decades. However, in tribute to those who lost their lives, a memorial fountain will be erected in the area where the Cabaret Room once stood.