ON THIS DAY IN HISTORY: Collinwood School Fire

04 Mar ON THIS DAY IN HISTORY: Collinwood School Fire

Posted at 12:22h in Today In History by TERPconsulting Team 0 Comments 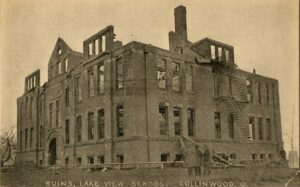 The worst school fire in U.S. history occurred on this date in 1908. A fire erupted on March 4 at Lakeview Grammar School in Collinwood, Ohio killing 172 students, two teachers, and a rescuer. Known as the Collinwood school fire, the four-story building went up in flames when heating pipes running next to exposed wooden joists ignited.

The design of the Lakeview School turned out to be an unintended fire trap. During the fire, the school’s brick masonry exterior acted as a chimney, sucking flames upward as the wood beams and wooden interior of the school burned while open stairways and the absence of fire breaks enhanced the chimney effect.

“In addition, the floors were oiled, a common practice of the time, which quickly fueled the fire,” Sarah Crosswy reported in a blog post for the National Museum of American History. “The layout of the school was also problematic. The main staircase ran from the front door on the ground level all the way to the top, with no fire doors or exits. This meant that once the ceiling joists above the furnace caught fire, the stairwell acted as a chimney, quickly spreading the fire. The building burnt so quickly that escape routes were blocked within minutes.”

Lakeview had only two exits, and fire quickly blocked the front door. Children rushed to the rear door but in a vestibule narrowed by partitions, they stumbled and climbed on top of one another, forming a pile that blocked the exit. “Anyone trapped inside had to either quickly descend the staircase or get out through the fire escape on the top floor,” Crosswy reported. In less than an hour, three floors and the roof of the Lakeview School collapsed into the basement, leaving a hollowed-out brick ruin.

The tragedy at Lakeview set in motion major fire safety precautions that were implemented not just in schools, but in public buildings throughout the country. Those measures included the development of easy and safe evacuation routes including the alteration of fire escape designs. Doorways were widened and new doorknob styles, in lieu of doorknob latches, were put into use. In addition to changes in doorknobs, crash bars (also called panic bars) were developed and added to fire exit doors. The legacy of the Collinwood fire was to usher in an era of fire safety measures and emergency preparation that is still credited to the tragedy today.