ON THIS DAY IN HISTORY: FIRE AT MoMA DESTROYS ICONIC CLAUDE MONET PAINTING

Posted at 10:12h in Today In History by TERPconsulting Team 0 Comments 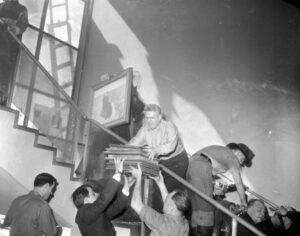 One of French painter Claude Monet’s most famous works of art was destroyed on this day in 1958. A 1925 painting from the famous impressionist’s iconic Water Lilies series valued at $40,000 was destroyed when firefighters broke through the windows of Manhattan’s Museum of Modern Art (MoMA).

A fire started on MoMA’s second floor during the installation of new units and updates to the Museum’s air conditioning system. When the electricians stopped for a noon cigarette break a canvas drop cloth caught fire near several open cans of paint which ignited the blaze. The three-alarm fire spread quickly through the “treasure house” as described by News of the Day.

Ruby Geller, a 55-year-old electrician from Brooklyn, died in the fire, three visitors were injured, and 25 firefighters were treated for smoke inhalation. In addition to the human cost, one of Monet’s Water Lily paintings measuring 18 feet, inspired by Monet’s Japanese-style gardens, didn’t make it. Jackson Pollock’s Number 1, 1948 was also damaged during the fire. Five hundred visitors escaped unscathed as did 2,000 pieces of art. The artwork was saved by MoMA employees and volunteers who passed it out of the museum piece by piece akin to a bucket brigade.

As we look back on this day 64 years later, it’s safe to say that current fire code regulations would have prevented the 1958 fire. “Considering the requirements of today’s code (NFPA 909*), the answer would unequivocally be yes,” Mark Hopkins, PE, FSFPE of TERPconsulting, says of preventing the fire. “Smoking would not be permitted in the building—this is something that was more prevalent in buildings in the 1950s than it is today—however, the requirements are specifically addressed.”

A member of NFPA’s Cultural Resources Committee (909 and 914*) since 2016, Mark explains, “There are sufficient risk evaluations and prescriptive measures identified, such as fire prevention/safety measures, requirements for fire extinguishers, fire protection systems, and passive features.”

Mark elaborates, “Fire extinguishers are required to be located throughout, providing access to trained personnel to catch a fire in the incipient stage. There are also requirements for fire-resistance-rated construction, sprinkler systems or alternative fire suppression systems, and fire alarm and detection systems, all of which would have limited fire spread and made early detection, notification, and extinguishment much more likely to be accomplished.”

NFPA 909 also gives the facility the opportunity to consider the consequences before the event (fire) and allows for the development of appropriate plans, contact lists, and procedures to ensure a successful outcome by protecting lives, the facility, and its collections, according to Mark, who adds “NFPA 909 requires the governing body to contemplate an acceptable level of loss for both items of cultural significance and interruption of service to the community. It also requires the governing body to develop Plans for Fire Protection, Emergency Action, and Salvage of Collections. These are not prescriptively developed. The governing body must develop a team of facility staff, consultants, and authorities to identify roles, responsibilities, and documentation of clear goals and objectives for the facility.”

Although a life was lost as well as a priceless piece of artwork, MoMA didn’t walk away empty-handed. The Museum received $300,000 in insurance payouts from the fire which was used to acquire a new Monet, the now celebrated Water Lilies triptych. However, $300K pales in comparison to what would have been today’s estimated value of the painting. In 2021 Monet’s Le Bassin aux nymphéas (Water Lily Pond, 1919), from his Water Lilies series, sold for $70.4 million.