ON THIS DAY IN HISTORY: Hartford circus fire leaves 168 dead and hundreds injured

Posted at 14:49h in Today In History by TERPconsulting Team 0 Comments 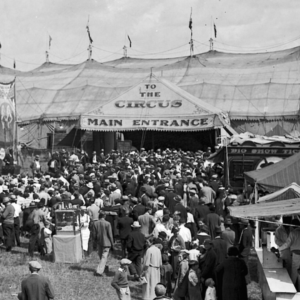 ON THIS DAY IN HISTORY: Hartford circus fire leaves 168 dead and hundreds injured
July 6, 1944, is known as “the day the clowns cried.” It was a hot day, around 90 degrees, in Hartford, Connecticut and a traveling circus had arrived in the small town the day before. World War II was dragging on, and the citizens of Hartford were glad for the distraction billed as “The Greatest Show on Earth” when it rolled into town by train.

With most of the town’s men away fighting in the war, it’s estimated that a crowd of 7,000 mostly women and children lined the bleachers inside of a massive tent, which measured 200 feet wide by 450 feet long with 15 feet high sidewalls and its roof was 48 feet high, to see the Ringling Bros. and Barnum & Bailey Circus. It was about 40 minutes into the 2 p.m. show, the big cats had just finished their act and highwire daredevils the Great Wallendas were performing. Bandleader Merle Evans noticed a small flame on the southwest sidewall of the tent. This would prove fatal to 168 people because the big top under which the circus entertainers performed was covered in 1,800 lbs. of paraffin wax that had been dissolved in 6,000 gallons of gasoline as a waterproofing method for the tent. Additionally, the floor of the big top was covered with hay and wood shavings.

Once Evans spotted the burgeoning fire, the bandleader acted quickly striking up the band to play “The Stars and Stripes Forever,” which was a previously established signal to let circus performers know something was wrong. Circus personnel rushed to put the fire out with buckets of water, but it wasn’t enough to stop the fast-moving blaze. They then started evacuating audience members. However, circus wagons were blocking several of the exits because following their performance the big cats were still being loaded up chutes and back into their cages on the wagons. Bedlam ensued as circus goers tried desperately to make their escape.

Aided by the wind, it took no time for the highly flammable tent to go up in flames and for melting paraffin to burn those fleeing to safety. Eyewitnesses estimated that it took about eight minutes for the fiery tent to collapse, burning and suffocating many to death. Others died after being trampled by fellow spectators trying to use congested exits. It is estimated that 700 were injured that fateful summer day.

The origin of the Hartford circus fire was never determined. One theory was that someone carelessly tossed a cigarette igniting the tent. Another speculation fire officials pursued was that the fire was caused by an arsonist. A 16-year-old roustabout who briefly worked for the show named Robert Dale Segee confessed to starting the blaze but later recanted his confession. On July 7, 1944, five Ringling Bros. employees were charged with involuntary manslaughter and brought to trial later that year. Four were convicted and went to jail. The Greatest Show on Earth eventually paid $5 million in compensation to the fire’s 600 victims and families who had filed claims against the circus by 1954.

In today’s world of life and building safety, when erecting a tent or membrane structure, multiple safety precautions must be followed. “Because tents are temporary structures, it may be assumed that precautions for fire protection and life safety aren’t needed,” said Shawn Mahoney, a technical services engineer at the National Fire Protection Association (NFPA). “However, particularly given today’s environment and circumstances, these provisions are more important than ever.”

NFPA 101® —in Life Safety Code®, and NFPA 1 — Fire Code, contain requirements that address the use of tents, including a provision stating that tents can only be used on a temporary basis and should not be erected for more than 180 days. In addition, the means of egress must comply with the requirements for the occupancy of the tent. Additional egress features should include exit markings and emergency lighting within the tent, along with measures to ensure that exits from the tent cannot be blocked.

“One of the biggest concerns with a tent, also demonstrated during the Hartford circus fire, is the flammability of the tent fabric,” said Mahoney. Both NFPA 1 and NFPA 101 require that tent material meets the flame propagation performance requirements of NFPA 701 — Standard Methods of Fire Tests for Flame Propagation of Textiles and Films. This is a test performed on the fabric of the tent by a testing organization, which will issue a certificate if the fabric has passed the test.

Fire safety has improved dramatically but in a sad irony, a photo of hobo clown Emmett Kelly, well-known for his sullen frown, toting a bucket of water to douse the flames of the Hartford Circus fire ran in several newspapers after the disastrous blaze making July 6th “the day the clowns cried.”