ON THIS DAY IN HISTORY: Triangle Shirtwaist Factory Fire

25 Mar ON THIS DAY IN HISTORY: Triangle Shirtwaist Factory Fire

Posted at 13:15h in Today In History by TERPconsulting Team 0 Comments 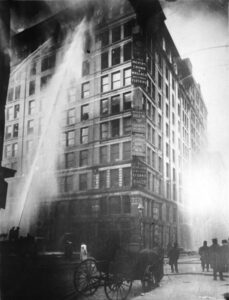 It took a mere 18 minutes for 146 garment workers to tragically die in the Triangle Shirtwaist Factory fire on this day in 1911. The manmade catastrophe happened late on a Saturday afternoon in the 10-story Asch Building located in Greenwich Village near Washington Square Park. The Triangle Waist Company was a sweatshop, a staple of the Industrial Age, located on the building’s top three floors and was filled with young Jewish and Italian immigrant women and children sewing shirtwaists, a popular mass-produced type of blouse worn by working women.

As the deadliest workplace disaster in New York City until 9/11, the fire started in a bin of cotton scraps located under a cutter’s table that hadn’t been emptied in some time. It was likely started by a match or cigarette butt. A factory manager tried to put the fire out with a hose, but the valve was rusted shut.

There was a multitude of issues that created the perfect storm for so many to perish. Doors only opened inward and were locked by factory management so workers could not take breaks. There was no sprinkler system and only one flimsy fire escape. Fire hoses and ladders only reached the 7th floor, and the fire was on the 8th floor.

It became a cautionary tale that redefined the American Industrial workplace. Fifty-eight workers jumped to their deaths, 49 workers burned to death or died from smoke inhalation, 36 died in the elevator shaft, and three more died from their injuries.

The tragedy of the Triangle Shirtwaist Factory fire not only encouraged the growth of labor unions but the 1911 passage of the Sullivan-Hoey Fire Prevention law which required sprinkler systems to be installed in all factories and established the New York City Fire Prevention Bureau. The New York State Legislature created a Factory Investigating Commission that implemented dozens of new laws surrounding fire safety and risks in the factory working environment.

Regulations that arose from the Commission’s work included improved building access and egress, the implementation of fireproofing methods, the availability of fire extinguishers, and the installation of fire alarm systems. The fire also led to the establishment of the American Society of Safety Professionals founded on October 14, 1911.