The Safety of Historical Buildings 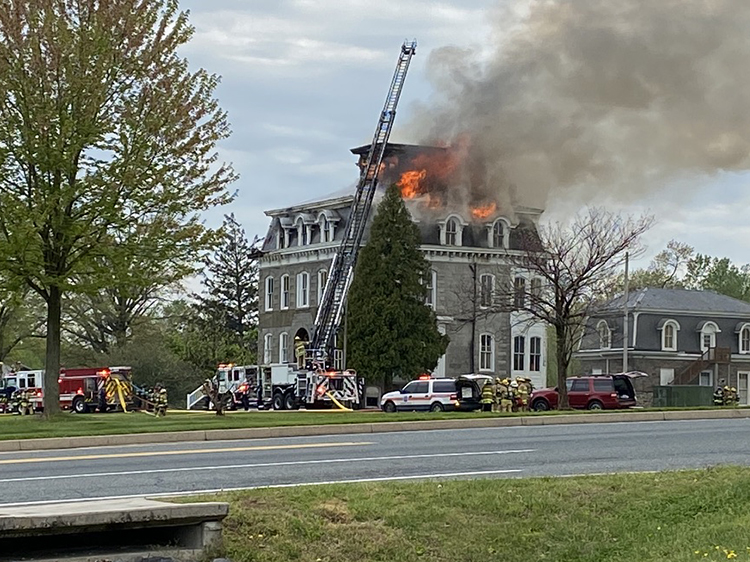 06 May The Safety of Historical Buildings

Posted at 12:53h in Code Consulting, Uncategorized by ann 0 Comments

We imagine at this point in time everyone is looking for a break in the monotony brought to us by being homebound from COVID-19. However, last Sunday, Mark Hopkins, regional director, and sr. fire protection engineer of TERPconsultings’s Mid-Atlantic region got a break he was not looking for. A neighbor texted Mark indicating that the historic structure across the street from his neighborhood was billowing smoke. After calling 9-1-1 and finding out that multiple calls had been placed, Mark and his family started hearing sirens. Apparently, the two-alarm fire was reported to have started in the basement of the second empire type structure known as Fair Meadows located in Creswell, Maryland.

This structure was built for Clement Dietrich in 1868, apparently with balloon style construction, which allowed for fire transfer from the basement to the attic of the structure. It appeared that water volume became an issue as hose streams appeared to control the blaze and suddenly stopped while the fire gained strength. After watching this recurring cycle for a while, the tides turned as a reservoir was established and water tankers from numerous surrounding districts arrived. This eventually allowed the firefighters to gain control of the fire. However, the damage to this structure (listed on the historic register) appears to be significant. For what was once a beautiful view of this old historical structure through the transom above Mark’s front door, will stand its charred remains.

Protecting structures like this with fire detection systems, sprinkler systems, and improving passive fire protection is necessary. Because it is on the national historic register, these measures should have been taken. If fire detection had been provided, the fire would have been discovered sooner. If sprinklers had been provided, a small fire would have likely been controlled. If passive protection improvements had been made, fire spread would have been limited. According to Mark, “events like this are a reminder of why I became a fire protection engineer in the first place.” Many thanks to all the firefighters working to suppress this fire for several hours. It does not appear that any lives were lost, but this structure is added to the many historic structures that have been lost to fire each year.

If you have a historical renovation project, we’re here to assist with the fire and life safety assessment of all building types. Please feel free to reach out to Mark with any code questions or project inquiries: