ON THIS DAY IN HISTORY: 1913 BINGHAMTON FACTORY FIRE MOST DISASTROUS IN CITY’S HISTORY

22 Jul ON THIS DAY IN HISTORY: 1913 BINGHAMTON FACTORY FIRE MOST DISASTROUS IN CITY’S HISTORY

Posted at 15:42h in Joe Plati by TERPconsulting Team 0 Comments 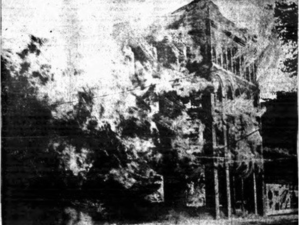 Although the Triangle Shirtwaist Factory Fire tragically took the lives of 146 people in NYC’s Manhattan two years prior, the lessons learned because of the 1911 blaze did not quite reach the streets of the southern tier of New York where the Binghamton Factory Fire occurred in 1913.

The two factory fires shared several similarities, more common to the period than not. While women’s shirtwaist blouses were being produced in the Triangle Shirtwaist Factory, the Binghamton Clothing Company was in the business of making men’s overalls. Both fires were thought to have been started due to someone carelessly tossing a cigarette into highly flammable materials on the factory floor. And both fires took the lives of immigrant workers, mainly women and girls, who were toiling in less than safe conditions full of fire hazards at both factories.

Located in downtown Binghamton, the Binghamton Clothing Company encompassed a four-story building where approximately 150 workers were employed. On July 22nd, however, only 111 workers were bent over the sewing machines that occupied all four floors of the building. Because the mid-summer day was much warmer than usual, doors and windows were standing ajar to let a strong breeze blow through.

In another attempt to keep cool many of the workers had stripped down to their undergarments so modesty would later prevent them from obeying the fire alarm went it started going off just before 3 p.m. Their self-consciousness, paired with ignoring the fire alarm because they thought it was just a fire drill, which they had been routinely practicing to great effect since the Triangle Shirtwaist Factory fire two years earlier, kept them at their stations churning out workingmen’s garments. And because the factory’s workers were paid by the number of items they finished each day, leaving their stations for a false alarm would cost them money, also a contributing factor to their apathy.

Hesitation on the workers’ part would turn out to be a deadly gamble. The fire started in the basement causing the open windows and doors to create a chimney of oxygen for the smoke and flames to quickly rise through the building and up the stairs to the third and fourth floors. By the time the workers realized the fire was not a drill the wooden stairwell was in flames leaving only two ways to escape to safety: jump out the windows or use the building’s sole fire escape. The women’s choices included plunging to their deaths from the windows or becoming engulfed by flames on the fire escape.

The fire department was called and although they were across town when they received the alert and only lost five minutes when responding, the four-story factory was nothing but a pile of ash and embers 18 minutes later. Upon arriving at the scene firefighters were faced with low water pressure due to an ongoing drought and heat from the fire that was far too intense to use their wooden fire ladders or safety nets. Thirty-one women died that day, eighteen of which were burned beyond recognition and, in turn, were buried in a large circle at Spring Forest Cemetery where a memorial has been erected to acknowledge the tragedy. The Binghamton Clothing Company fire was a loss of $100,000, never to reopen.

Following the aftermath of the Triangle Shirtwaist and Binghamton catastrophes, New York’s legislators created the Workers’ Compensation system as well as passed dozens of laws mandating workplace health and fire safety protections includingautomatic sprinkler systems, fire alarms, adequate fire escapes, and stairways. The two New York factory fires also precipitated the National Fire Protection Association (NFPA) to create the Committee on Safety to Life in 1913, which developed a comprehensive guide to exits and life safety features in the Building Exits Code of 1927, which was the forefather to NFPA 101 – Life Safety Code.

While NFPA 101 has been essential to fire and life safety measures, New York’s building code community continues to be very proactive in developing comprehensive construction codes. “The first comprehensive code adopted in New York City (1899) was 212 pages. The upcoming 2022 New York City Building Code is measured in the 1,000s of pages over five codes addressing specific types of construction. This doesn’t include the recently adopted 2022 New York City Fire Code or the pending adoption of the 2022 New York City Existing Building Code. Or the 100s of standards and codes referenced by these documents for anything from sprinkler system design to fire resistance rating tests to slip resistance requirements for floor finishes,” explains Joseph Plati, PE, New York Regional Director for TERPconsulting. “To bring it back around to NFPA 101, while it’s not as widely adopted as the International Code Council (ICC) codes and standards, many of the other NFPA standards that have been developed are the “gold” standard for fire protection and life safety concepts. The importance of NFPA’s presence in the code-making world was solidified through terrible tragedies like the Triangle Shirtwaist and Binghamton factory fires.”

The evolution of the fire protection engineer has also played an essential role in the development and sophistication of fire codes and standards to ensure safety. “Every incident in our history is methodically researched and analyzed by fire protection engineers, amongst other engineers and architects, to determine how we should modify our codes to do better in the future. We are proactive, addressing new and changing hazards in the built environment. It’s a complicated and thorough machine that generates the codes and standards we have today,” says Plati.

“We’re there to be the angel on the shoulder of every building occupant, without them knowing we’re even there,” adds Plati. “As they walk through their office, watch their kids play, have dinner with their friends, or sleep in their high-rise condo they don’t know how much effort has gone into making sure they have all the appropriate features to keep them safe in the event of a fire.”